The “Larson” Bladed Lancet is a device intended to pierce or cut tissue during a neurosurgical procedure. It allows the surgeon to leave the dura closed after mounting the frames and use it to pierce a hole through the dura and pia right before insertion. It has an outer diameter identical to the stylet and peel-away sheath assembly and fits snuggly in the TC with no reducing tube necessary. The Larson Lancet is intended to be used only when the scanner is not performing a scan. 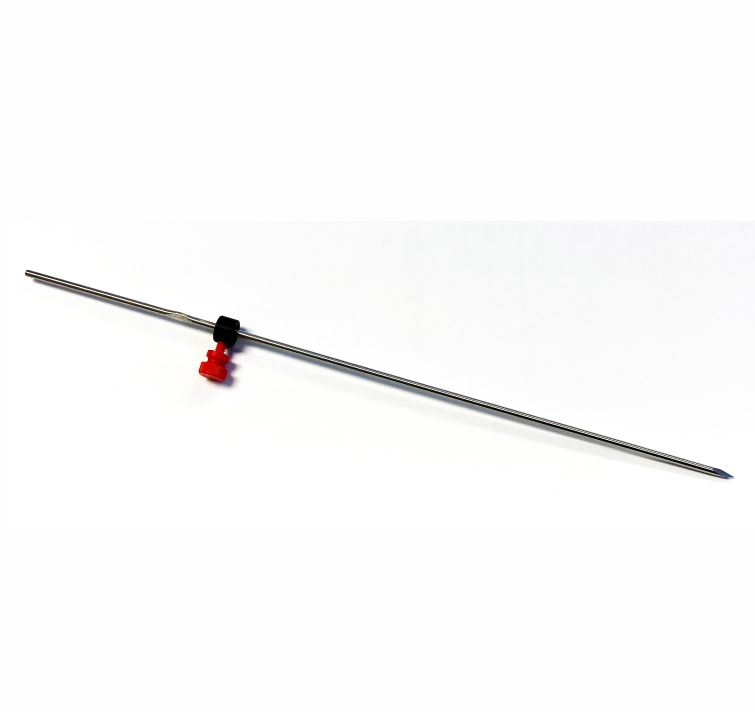 The Larson Lancet received its name from Dr. Paul Larson, Professor and Vice Chair of Neurological Surgery at UCSF. In 2012, Dr. Larson and ClearPoint Neuro’s R&D team started the development of a device that was s pointed version of our round ceramic stylet. A pointed version is advantageous because it pierces through the dura/pia instead of cutting it. The result was the ceramic Lancet, which we included in our Accessory Kit. It featured a sharp conical tip that can pierce the dura and pia, just as Dr. Larson envisioned. However, Dr. Larson stated that he would likely cease use of the closed dura technique because of the potential accuracy concerns. As a solution, he suggested the lancet be made from an MRI-compatible metal, making it stronger and able to pierce the dura without shifting.

Over the course of about two years and over 300 procedures, the advantages of the lancet’s effectiveness became evident. Neurosurgeons reported obtaining the same accuracy as they would with the “open dura” technique, and it was safer than using a scalpel to cut the dura. We are proud to announce the Larson Lancet has been cleared by the FDA.